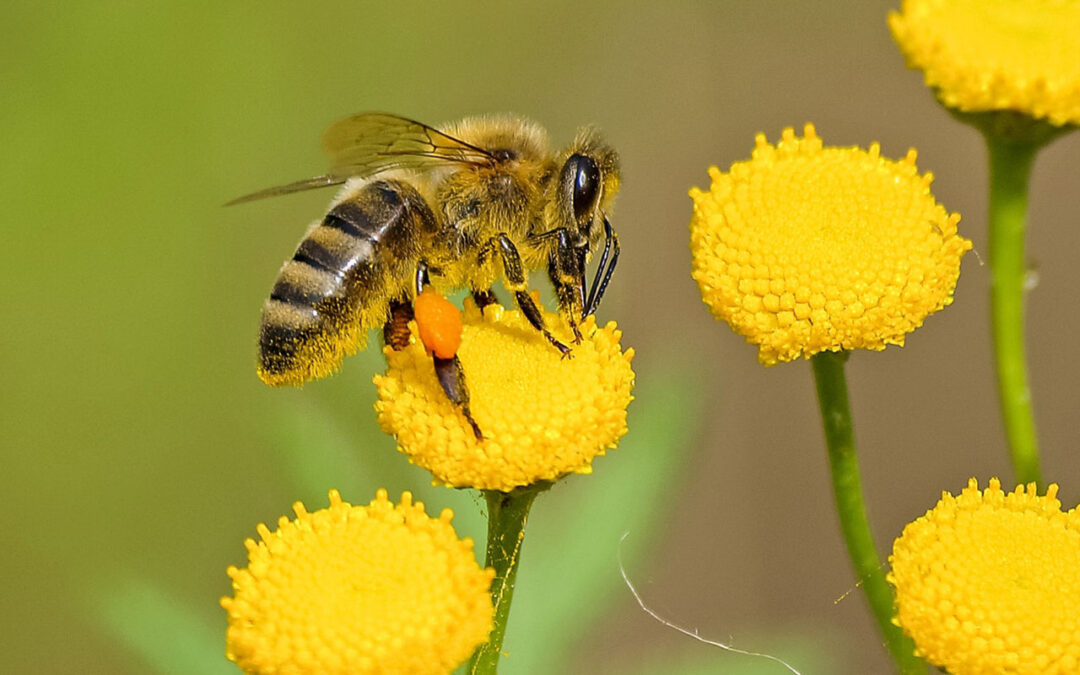 On my last encounter with a beehive, I tripped, tumbled, and screamed my way down a grassy hill in a mad attempt to outrun an angry swarm of yellow jacket bees. By the time I landed in my mother’s arms, I had suffered fifteen bee stings in my butt! I was ten and impregnated with a new fear in an instant. As I sat in a bathtub of tomato juice to calm the stings, I sobbed and swore I’d never EVER get near another one of those angry, carnivorous bees again.

Etched into my mind for several decades to follow was this innocent misunderstanding that those bees represented all bees, and therefore all bees were angry and armed to sting if I so much as breathed in their direction.

Then one day, I heard whispers that the honeybees were disappearing mysteriously. I’m embarrassed to admit that I hadn’t made the HUGE distinction between yellow jackets and honeybees until that moment, long after entering adulthood.

I grew a healthy respect and admiration for honeybees at that point, as well as a love for their most delicious by-product, honey. I began devouring honey at glutinous rates. I poured that delightful treat on everything from coffee to toast.

Then, about a year ago, that admiration turned into a healthy obsession to understand this magnificent creature even more. I was sitting in my living room, flipping through some TedTalk videos, when I came across one presented by Dr. Marla Spivak, Why Bees are Disappearing.

When the video ended, I immediately knew I wanted to learn much more about honeybees and what I could do as an individual to help save them. I also knew that one day I would write a novel featuring these magnificent beings. Dr. Spivak offered several key ways a person could immediately help save bees. She suggested planting wild flowers and avoiding the use of pesticides and insecticides. I knew I had a lot to learn, and thus one day I’d have a lot to share.

I contacted Dr. Spivak and she referred me to an insightful book, Lessons From the Hive written by a fellow Entomology expert, Mark L. Winston. I absorbed every ounce of information he offered. Then, I furthered my research by contacting a local organic beekeeper at Sweet Artisans Apiary in MD. I sat down with Steve and Kathy Sweet (yes, their last name is so cool and fitting!) and they educated me on everything and anything honeybees. When they spoke, they did so with a love kindred to that of a parent talking about their child. They consider their bees family. The admiration and respect they have for them caused my eyes to tear as I listened to them for four hours on that first encounter.

They later invited me back to their apiary to help them place their pollen collector trays in their hives. Talk about a rush! With the silly, ignorant fears of the past long gone, I suited up in their garage and then entered the apiary – a newfound paradise to my senses. The bees buzzed, danced, and went about their business of maintaining the hive as I stood a curious onlooker to their fascinating lives. Did you know that if you lean in close enough to the honeycomb hive, you can feel the wind from their wings?

I started writing The Dance immediately following this visit. Here’s a quick summary: The Dance is a dramatic story that deals with friendship, mentorship, and love. A beekeeper and an overwhelmed woman who is thrown into the thrusts of being a single parent to her teenaged daughter after her spouse dies, learn to dance around life’s ups and downs as they come face-to-face with the many parallels between them and the honeybees they begin to nurture together.

Here’s a little peek into my apiary visit adventure.